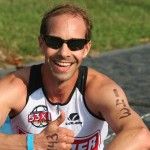 Mike Morgan began his racing career at age 11, initially racing motocross on 80cc motorcycles before moving up to 125cc bikes. At age 17, he transitioned from dirt bikes to road bikes and has never looked back. Mike placed on the podium with a 2nd place finish his first year. He continued to place on the podium the following year and won his first race as an amateur, and beginning a career in professional motorcycle road racing. For 8 years Mike raced at the highest level in the USA achieving many successes as both a privateer and factory rider.

In 2012 Mike participated in his first triathlon race as a way to prepare for the fitness level that is required to race motorcycles. The 2013 motorcycle racing program had to be put on hold until new sponsorship was acquired, which unfortunately never came and RIM Racing was forced to cease motorcycle racing all together in 2014. Mike retired from motorcycle racing but began a new racing career in 2013 with triathlons. In his first year of competing Mike was able to complete an Ironman 70.3 and finish 2nd overall in an Olympic triathlon.

RIM Racing and Mike will be a regular participant in triathlon racing during 2014 and many years to come. With new support in the triathlon world and health being a top priority, Mike is once again showing what it takes to be a top competitor.  Be sure to follow along on Facebook (rim racing mike morgan), Twitter (Michael Morgan @RIMRacing) and Instagram (RIM_MIke).